Sarah’s coming home.” Ever since Damon Wilder sought refuge in Sea Haven, he’s heard the same breathless rumor pass the lips of nearly every local in the sleepy coastal town. Even the wind seems to whisper her name — a reverie so powerfully suggestive that it carries the curious Damon to Sarah’s clifftop home, and seeks to shelter him there.

But Damon has not arrived alone. Two men have tracked him to Sea Haven, and into the shadows of Drake House, where Sarah hides her own secrets. And danger — as well as a desire more urgent than either has ever known — is just a whisper away… 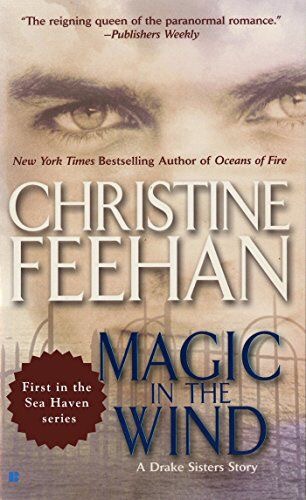 I was a little disappointed with this book, it’s basically a short story (the other sisters get a full length book) but it is full of action, and sets the series up nicely.

Sarah is a security expert, she spends a lot of time away from her home and her sisters.
She is the eldest of seven sisters ….. Kate, Abigail, Libby, Hannah, Joley and Elle.
(They all live in the same house, a gift from their mother)

The sisters all have powers, Sarah has the power of precondition (she knows what will happen in the future) it’s been a help in the past.

There is a prophecy says that if the gates of their home opens to a man, they are destined to marry, and in order of eldest to youngest. Is that why the sisters haven’t been home in a while?

Damon is hiding, he’d seen a colleague murdered, and now he’s on the run. He never intended to stay in one place, but Sea Haven called to him, and he’s now been here a month, he’s brought a home, he wants to stay…..

Considering there is only a 103 pages, there is a lot going on. We meet some of the sisters (with the promise that the rest of the sisters are coming home) we have a fight scene (involving the house!!) and we have a love scene.

It would be nice if one day the author made the book longer, but as it’s a few years old, I don’t think it will happen.