The Stone Warriors: Gabriel by D. B. Reynolds.

Description…..
It was a time when gods walked the earth, when armies fought not for bits of land, but for the very existence of humanity. On such a battlefield, five formidable warriors stood against an evil greater than any the earth had ever seen. But evil is not an honorable foe. Betrayed by someone they trusted, the warriors were cursed, one by one, tossed into the maelstrom of time, imprisoned in stone, their freedom resting on nearly impossible conditions. Until. . . .

Gabriel Halldor. . . one of the fiercest warriors the world has ever seen, but his tremendous skill can’t save him from a sorcerer’s curse. Trapped in stone and left lying in darkness for thousands of years, he is, at long last, brought into the sunlight of a Japanese garden, where a young girl comes to sit at his feet and read him stories as she grows to womanhood.

Hana Himura. . . beloved granddaughter of a Japanese mob boss, raised to the life of a warrior. When death comes for her grandfather, he sends her to the one guardian courageous enough to protect her from a sorcerer who will stop at nothing to have her.

Raphael. . . the most powerful vampire lord on earth, and the only man who can save Gabriel and Hana from an enemy who would enslave them both.

Running from the certain death that awaits them in Japan, Hana and Gabriel flee to Malibu and the vampire lord her grandfather called friend. Raphael is magic and power combined, and Gabriel and Hana will need both if they’re going to survive long enough to defeat their enemy and light the flame of desire that’s been simmering between them for years. 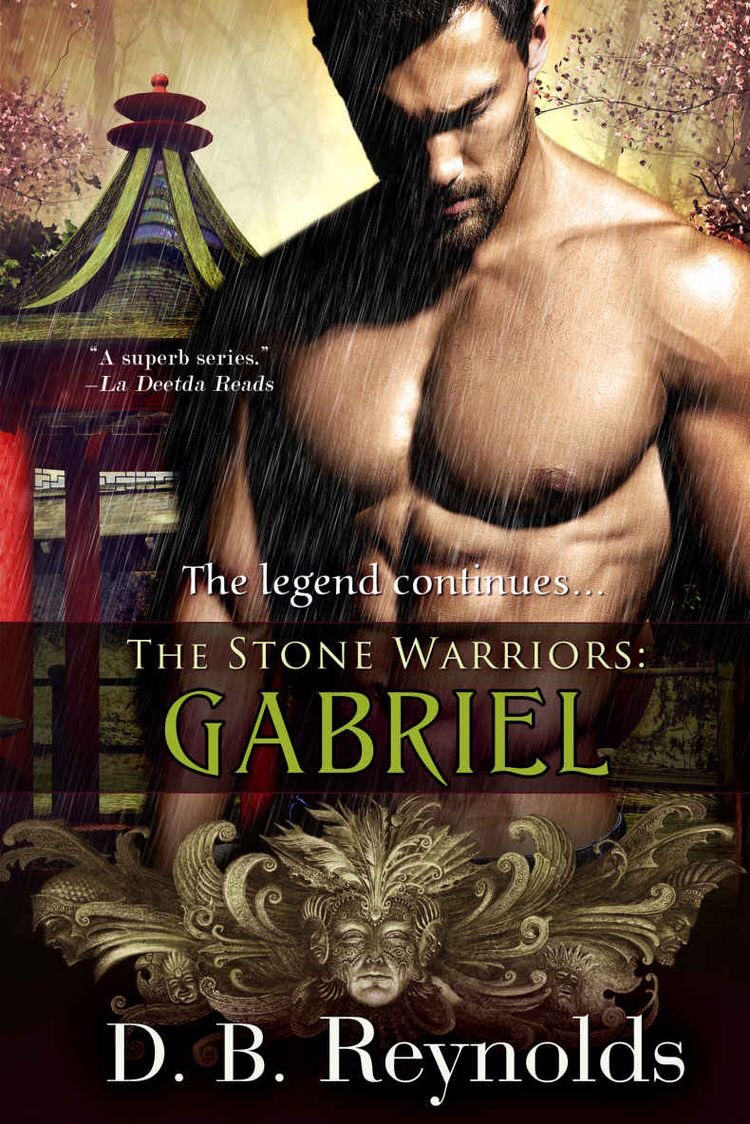 Now, this one I really liked. A more complex book, it really had me hooked…..
“URBAN GABRIEL HALLDOR, a berserker on the battlefield, a monster who drinks his enemy’s blood and wears his flesh like the finest cloth . . . you shall remain locked in stone until a woman’s tears shall soak into your skin, and her pleas for safety reach you in the chaos of battle.” That was Gabriel’s curse.
A beserker old, loving the battle and the cries of his fallen enemies. He lived to serve Nicodemus and to battle along side his three brothers (Damian, Kato and Dragan) but there was something beside the berserker, long ago, Gabriel had been turned into a vampire, with the help of Nico, he kept it on lockdown, his brothers never knowing of his anger and shame.
Hana has always known of Gabriel, the beautiful statue in the garden, she’s often sit at his feet and feel safe. And she’d know that one day he’d save her. Hana is a rare breed, she can amplify power, so she’s a power source that many would kill to obtain. Trained as a warrior by her grandfather, Hana has always known and been aware of magic. And when her home is attacked, she knows exactly where to go…..
The pair set off to find the only person her grandfather trusted, but by the time they get to Raphael’s home, Gabriel isn’t in great shape.
Raphael is a master vampire (or Lord in this series) and he has his story in several other books (Vampires in America) when meeting him for the first time, Hana was extremely wary of him, Raphael has power, it emanates from his very pores.
Giving sanctuary to both Gabriel and Hana, it allows them to catch their breath and rest.
Is Sotiris the sorcerer still causing havoc? (Hmmmm can’t tell you)
And where does Nicodemus fit into the scheme of things? The hatred between Raphael and Nico is volatile to say the least, (I’m going to have to go and read the previous series now!!)
We catch up with previous characters from previous books, the interaction is very comical, the love for one another is very evident.
So we have a feud that has carried on for a millennia, a stone warrior with a side order of vampire! A woman whose a conduit and can magnify a witch/sorcerers powers. And chemistry that just burns the pages 😉
Can’t wait to read Dragan (next book) and maybe Nicodemus can find a feisty female to keep him in line.
🦋