Design a site like this with WordPress.com
Get started
Skip to content
To Win a Wicked Lord (Shadows and Silk) Book 4 by Sofie Darling
﻿Description……
﻿ Lord Percival Bretagne is used to playing games. He survived being a spy for a decade using his wits alone. But that was just life and death, now he’s playing for the most important prize of all—love.

Ten years after his family gave him up for dead, British spy Lord Percival Bretagne is back home, but his mission is far from over. Playing the aristocrat in London gambling dens and at country house parties is just a cover for Percy’s real quest. He’s hunting the man who stole everything from him—his family, his marriage, even his identity. And this time nothing, and no one, will stand in his way.

But one night with Isabel Galante changes everything. She’s willing to gamble a woman’s most intimate prize in order to save her imprisoned father, but she didn’t expect a devilishly handsome opponent with a dangerously attractive wicked streak. Isabel would do anything for her family, including betraying Percy, but she has no idea that she’s stumbled into the middle of a decade-long quest for revenge.

Who Will Win in the Game Called Love?

Percy has been betrayed before, and now the man who destroyed his life is using Isabel to strike again. With the fate of the government and his new life in the balance, he’ll have to keep Isabel seductively, scandalously close. They begin a passionate game of truth and lies, deception and dalliance, uncovering the heart of who they really are and realizing that winning might mean losing what matters the most—each other. 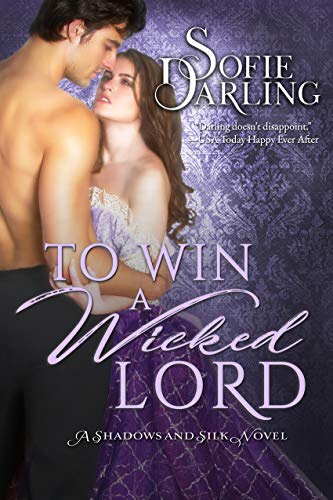 Although it’s from a series, they all read as standalones.
Percy has been a spy for ten long years, it’s something he’s good at, and he likes it. But he wasn’t always a spy, his past is an interesting one, and we get to see glimpses of it through the story. But we get the full story near the end of the book.
He uses people to his advantage, and has no conscience, it’s for the good of the country (well that’s his excuse) and when an opportunity to return to England presents itself, Percy takes it with both hands. He’s going to end this game once and for all. He lost everything once, he’s not prepared to lose again. But Percy also has a dark side, an addiction to the chase, can he simply give up this spy game and become a Lord once again?
Isabel is a seamstress, but blackmail has her pretending to be a prostitution. She has to win to keep her family together, but meeting Percy throws it all into chaos. I liked Isabel, she had deep family loyalty, but when she meets Percy, she’s torn, does she do as her blackmailer wants? Or can she find a way round this mess, and have Percy and her family?
This is basically a mystery/romance. The main characters are very well written, both have a sense of duty, neither will be taken for a fool, both have been let down in the past. Liked the premise of the book, usually a period romance had the female role as a simpering fool, a weak minded simpleton. But Isabel is more than that, she has a brain, and it’s fully engaged at all time’s.
Percy is your usual rogue, but he has a hidden side, and that becomes more evident the further you get into the book.
Scenes are well written, the romance side is steamy and it rolls at a steady pace.
🦋