She’s a witch on the run, with the Council’s most dangerous assassins on her tail.

Ava has been tried and convicted of the worst possible crime: Treason against the High Warlock, and the Council. Sentenced to death, she managed to escape her fate with help from some Fae friends, but those friends can’t keep her safe much longer.

The Council has put a bounty on Ava’s head that has every bad guy in the Universe looking for her. Her only choice? Return home to her sisters and hide, as their mother had for so many years, and hope she doesn’t meet the same dark fate.

But Ava wasn’t born to hide. With her mother’s strength and her father’s power, standing up for her place as Heir to the Council may endanger her life, but it’s her birthright, and she’s not going down without a fight. 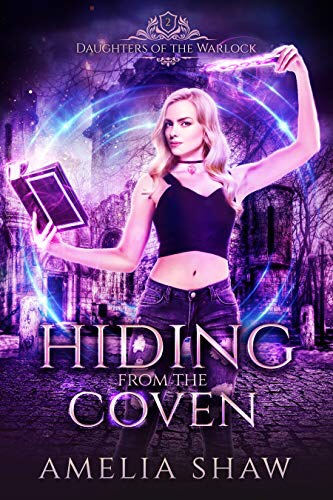 The second book sees Ava on the run from the High Council. She’s been sentenced to death, she shouldn’t be alive, her conception was a mistake! (Her father had children with another woman) her existence is a threat to the council (they are worried she will threaten their way of life) so she’s hiding in the Fae realm, but it’s still too risky, she needs to get back to her sisters…..

We spend a majority of the second book with Ava and her sisters. They all need to be careful, although Ava never told anyone (except her father) that she has sisters.

They begin to practise in ernest to defend themselves. They don’t want to live forever in their protected little bubble. And as there is a bounty on Ava’s head, they can’t be too careful.

The romance side of this book runs a little hot then cold. Ava is definitely interested in Tavlor, but as he’s half Fae, half warlock he doesn’t think he’s good enough for Ava, plus he’s also the one hunting her!!

But the further into the book we go, the more we see Tavlor battle with his feelings.

Can they be together when everyone else is trying to pull them apart?