In Azusa, California in 1978, Roy L. “Rocky” Dennis (Eric Stoltz), who has craniodiaphyseal dysplasia, is accepted without question by those who know and love him: the boyfriends of his freewheeling biker mother, particularly Gar (Sam Elliott); his “extended motorcycle family”; and his maternal grandparents (Richard Dysart and Estelle Getty) who share his love of baseball card collecting. However, many others fail to see his humanity, intelligence and humor and thus respond to his unusual appearance with fear, pity, awkwardness, and uncertainty. Rocky’s mother, Florence “Rusty” Dennis (Cher), is determined to give Rocky as normal a life as possible, in spite of her own wild ways as a member of the Turks biker gang, as well as her strained relationship with her parents. She fights for Rocky’s inclusion in a mainstream junior high school and confronts a principal who would rather relegate him to a special education school, despite the fact that his condition hasn’t affected his intelligence. They then go to the doctor for Rocky’s semi-annual physical, where Rocky claims to be feeling well, despite continuing headaches, which his mother can sing away without medicine. A young doctor tells Rusty that Rocky will probably not live for more than six months. Rusty scoffs at this claim, as doctors previously made failed predictions that Rocky would be blind and suffer other maladies.

Rocky goes on to thrive at school. He wins friends by assisting a fellow student with remembering his locker combination. Using humor when faced with an awkward silence during roll call, Rocky just repeats the prior new student’s line, “Wow, thanks a lot.” The class turns to smile and laugh with Rocky. He entertains his history class by giving a rendition of the story of the Trojan Horse and it being the turning point of the Trojan War. Gradually overcoming discrimination and tutoring his classmates for $3 per hour, Rocky is asked by the principal to accept a job as a counselor’s aide at Camp Bloomfield, a summer camp for blind children. Unsure, he declines the invitation, but says he’ll think about it.

Rocky tells his mother that he needs a suit to go to his graduation. He is dismissed by the Turks and Gar tells him to bring a beer from the refrigerator. To his surprise, Rocky finds a suit inside, which he gladly thanks everybody for. At his graduation from junior high, Rocky takes home academic achievement prizes in mathematics, history, and science. Biker Dozer, who loves Rocky and has a thick stammer, tells Rocky that he is proud of Rocky’s achievements.

After a visit from Rocky’s grandparents, where Rocky’s grandfather continuously puts Rusty down, they take Rocky to a baseball game. They return to find Rusty in a drug-induced stupor. Afterwards, Rocky feels the need get away from his mother, to help her break her drug habit, and accepts the job as the counselor’s aid.

At camp, Rocky falls in love with Diana Adams (Laura Dern), a blind girl who cannot see his deformed skull and is entranced by Rocky’s kindness and compassion. Rocky uses his intelligence to explain to Diana words like “billowy”, “clouds”, “red”, and “green” by using cotton balls as a touchable vision of “billowy clouds”, a warm rock to explain “red” and “pink”, and a frozen rock to explain “icy blue.” Diana introduces Rocky to her parents, who are put-off by Rocky’s appearance, and do not want Diana to spend time with him.

Near the end of the film, Rocky faces the pain of separation from the two people to whom he feels closest. His dream of a motorbike trip through Europe collapses when his best friend Ben (Lawrence Monoson), who was to come with him, tells him that he is dropping out of school and moving back to Michigan for good. This drives Rocky into berating Ben and calling him “stupid”. However, Rocky feels better after taking a bus trip by himself to visit Diana at the equestrian stables, located near Griffith Park. They share a romantic moment, and Diana tells Rocky that her mother prevented her from receiving his phone messages. But then, she reveals that she is going away immediately to a private school for the blind, and cannot be with him. To add to this, a member of his biker family, Red, passes away (presumably from cancer). Also, he attends high school, where none of his friends are, and where he used to respond to taunts with wit and humor, he responds to a boy by pushing him against a locker and calling him a son-of-a-bitch.

One evening when Rocky’s “biker family” is visiting, Rocky is fighting a fierce headache and quietly withdraws to his room, removes the tacks from his wall map of Europe, and goes to bed. The next morning, Rusty tries to wake up Rocky for school and flies into a fit of grief-stricken rage when she realizes he has died. After destroying the kitchen, Rusty mourns the death of Rocky and says “Now you can go anywhere you want, baby.” She then re-pins his map of Europe.

The movie ends with Rusty, Gar, and Dozer visiting his grave, leaving flowers and some baseball cards by his headstone and a voice-over by Rocky himself, who recites the poem he wrote for English class earlier in the film. 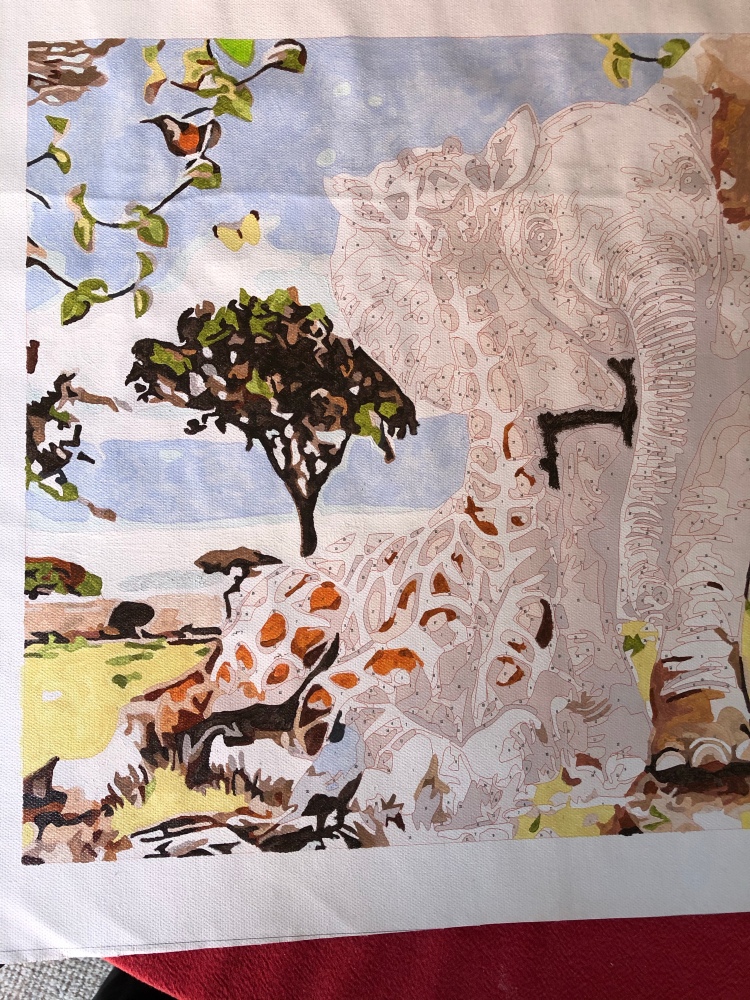 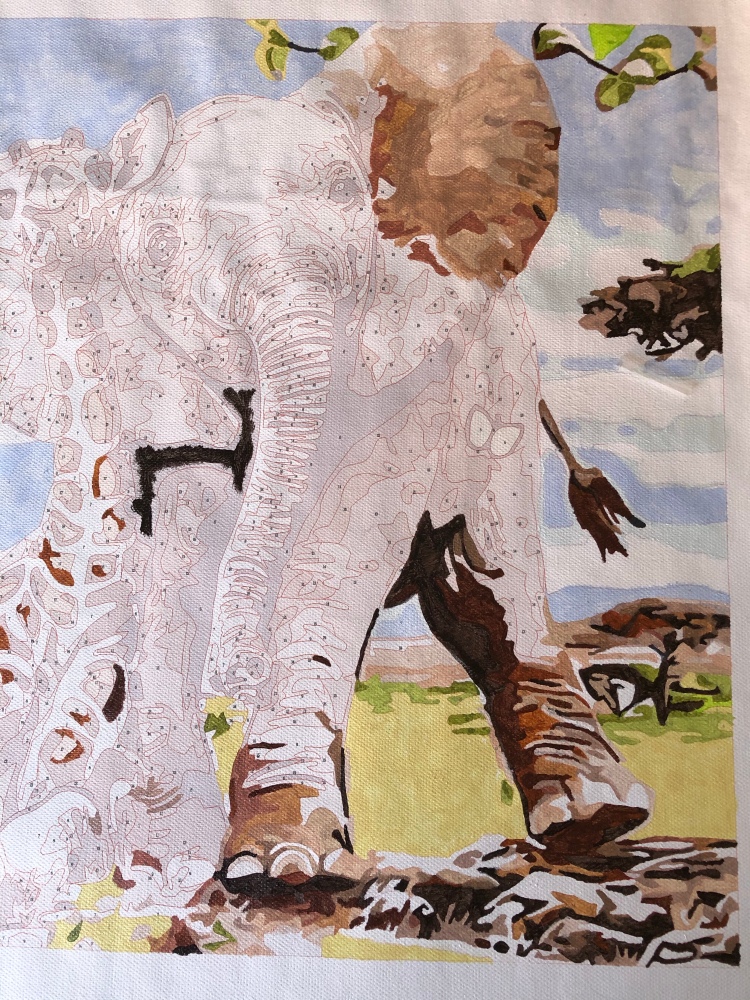 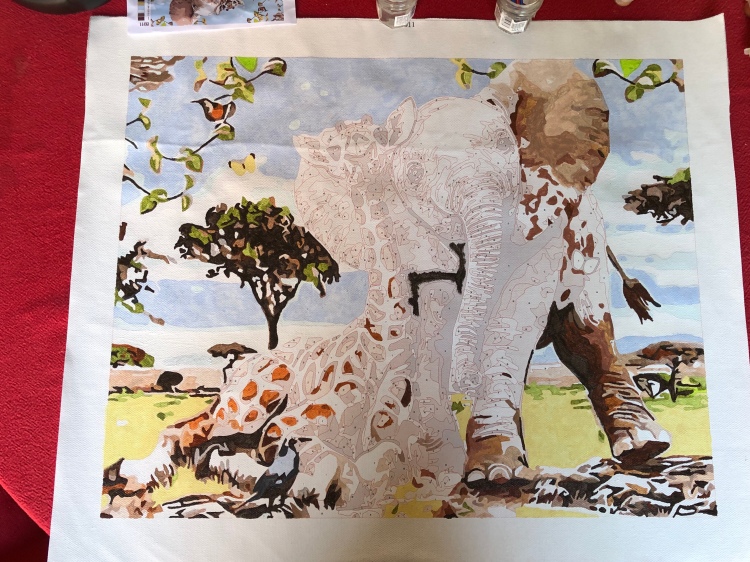 In between a little housework and watching people walk past the house, I did a little painting. 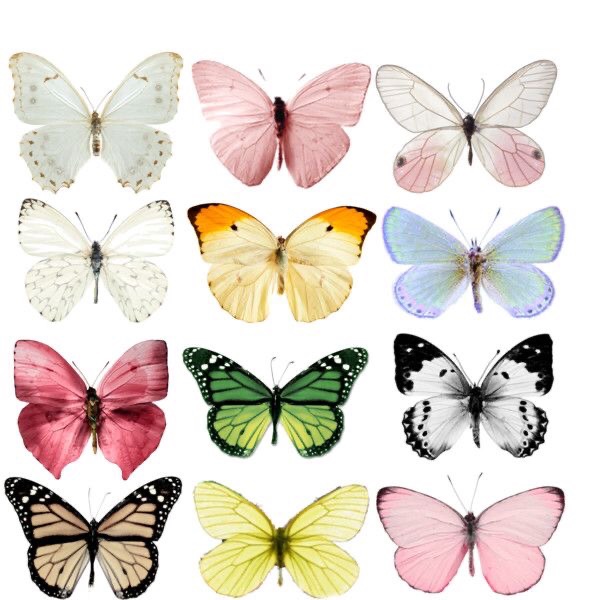