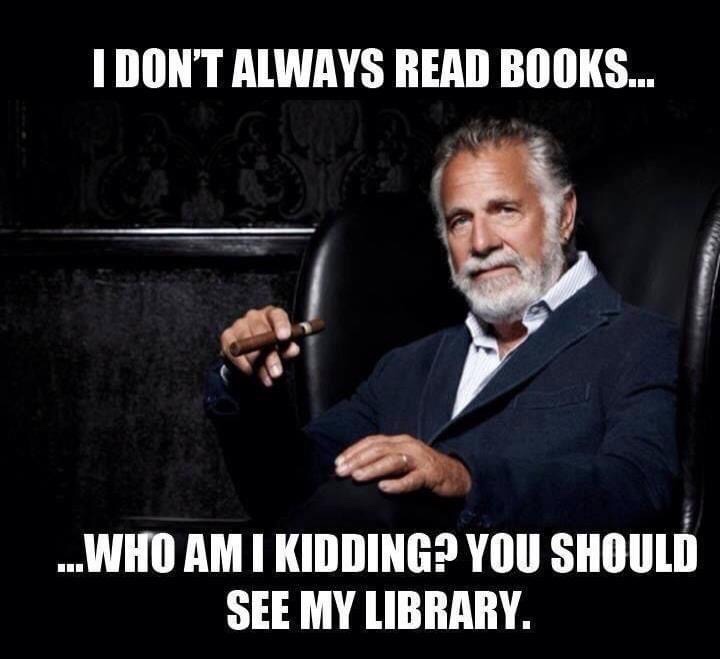 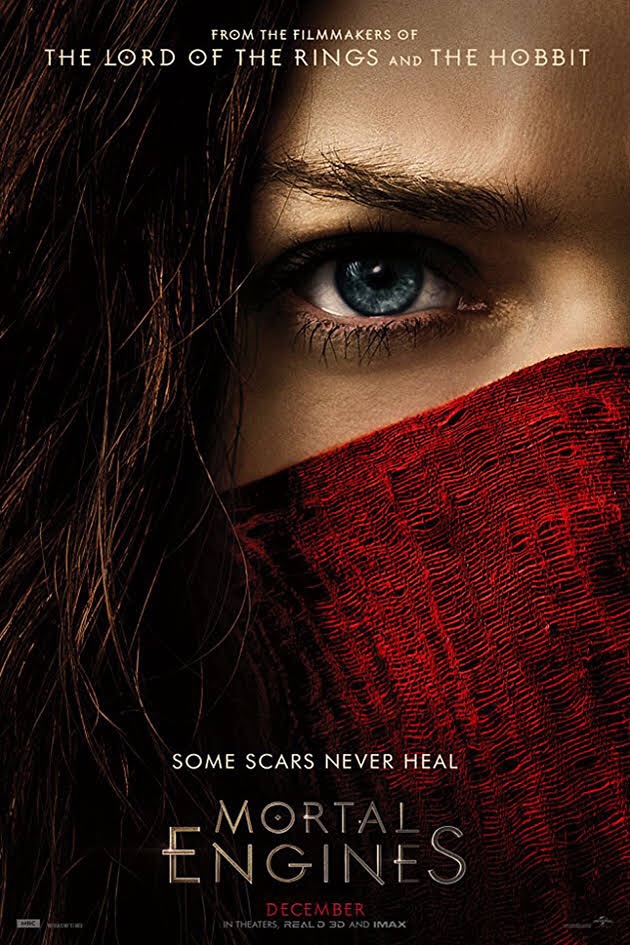 Following a cataclysmic conflict known as the Sixty Minute War, the remnants of humanity regroup and form mobile cities, called “Traction Cities”. Under a philosophy known as “Municipal Darwinism”, larger “predator” cities hunt and absorb smaller settlements in the “Great Hunting Ground”, which includes Great Britain and Continental Europe. In opposition, settlements of the “Anti-Traction League” have developed an alternative civilization consisting of “static settlements” (traditional, non-mobile cities) in Asia led by Shan Guo (formerly China), protected by the “Shield Wall”. Relics of 21st-century technology such as toasters, computers, and smartphones are valued by historians as “Old-Tech.”

The city of London captures a small mining town called Salzhaken, absorbing its population and resources, under orders of Lord Mayor Magnus Crome. Tom Natsworthy, an apprentice historian, arrives at London’s “Gut” to collect Salzhaken’s Old-Tech for London’s Museum. Hester Shaw, a masked twenty-something woman among the Salzhakens, attempts to assassinate Thaddeus Valentine, Head of the Guild of Historians, but Tom intervenes, pursuing Hester to a chute. Hester escapes, but not before telling him that Valentine murdered her mother and scarred her face. When Tom informs Valentine of this, he pushes Tom down the chute.

Tom and Hester are forced to work together to traverse the Hunting Ground, surviving Southies, Scavs on a night hunt, and finding refuge in a vehicle called Scuttlebug, but the owners lock them in a cell, intending to sell them as slaves. Hester confides that Valentine killed her archaeologist mother Pandora after stealing a piece of Old-Tech she found in a dig in the Dead Continent of the Americas, whilst young Hester escaped with a necklace her mother gave her. Meanwhile, Valentine frees Shrike, a reanimated cyborg known as a “Stalker”, from the offshore walking prison Sharkmoor, to find and kill Hester. At the slave market of Rustwater in the Outlands, Tom and Hester are rescued by Anti-Traction League agent Anna Fang. During the chaos, they are pursued by Shrike, whom Hester reveals she knows. Hester explains that Shrike had found and raised her after escaping Valentine, and Hester promised to let him turn her into a Stalker like himself, but she left after discovering that London had entered the Great Hunting Ground, giving her a chance to kill Valentine. In London, Valentine’s good-natured daughter Katherine grows estranged from her father, especially after Apprentice Engineer Bevis Pod informs her that Valentine pushed Tom down the chute, and they learn Valentine’s energy project in the re-purposed St Paul’s Cathedral is more than it seems.

Hester and Tom travel on Anna’s airship, the Jenny Haniver, to the airborne city Airhaven, meeting other Anti-Traction League members. After questioning Hester, Tom realizes Pandora discovered a computer core for MEDUSA, a quantum energy-based superweapon used by the belligerents during the Sixty Minute War to instantly destroy entire cities, albeit shattering the Earth’s crust into a thousand pieces that have rearranged the former continents. The Guild of Engineers have stolen the remaining components from Tom’s museum workshop and built a MEDUSA under Valentine’s orders. Shrike catches up with them, resulting in a fierce skirmish that critically wounds him and destroys Airhaven. Realizing that Hester is in love with Tom, he frees her of her promise before perishing. As Hester, Tom, and Anna travel to the Shield Wall with the surviving Anti-Tractionists, Valentine kills Crome in a coup and musters support from Londoners by vowing to destroy the Shield Wall with MEDUSA and lead them to a new Hunting Ground in Asia. Anna convinces Shan Guo Governor Kwan to launch the Anti-Tractionist airship fleet against London, but MEDUSA destroys the fleet and blasts a hole through the Shield Wall. After coming upon a stone carving of Medusa, Hester discovers that her mother’s necklace hides a “crash drive”, a kill switch for MEDUSA. Hester, Tom, Anna, and the remaining Anti-Tractionists lead a raid against London, braving the city’s anti-aircraft guns.

Hester and Anna infiltrate St Paul’s, and though Valentine mortally wounds Anna during a sword duel, Hester destroys MEDUSA with the crash drive. In a last-ditch attempt to destroy the Shield Wall, the now insane Valentine has his henchmen kill the city’s control crew and put the city on full throttle on a collision course with the Wall. With Katherine’s help, Tom uses the Jenny Haniver to destroy London’s engine. Hester catches and fights Valentine aboard his airship, where he reveals that he is her father. Tom rescues Hester and shoots down Valentine’s ship, which is crushed by London’s slowing tracks, killing Valentine. The surviving Londoners, now led by Katherine, make peace with the Anti-Tractionists, whilst Tom and Hester leave in the Haniver to see the world. 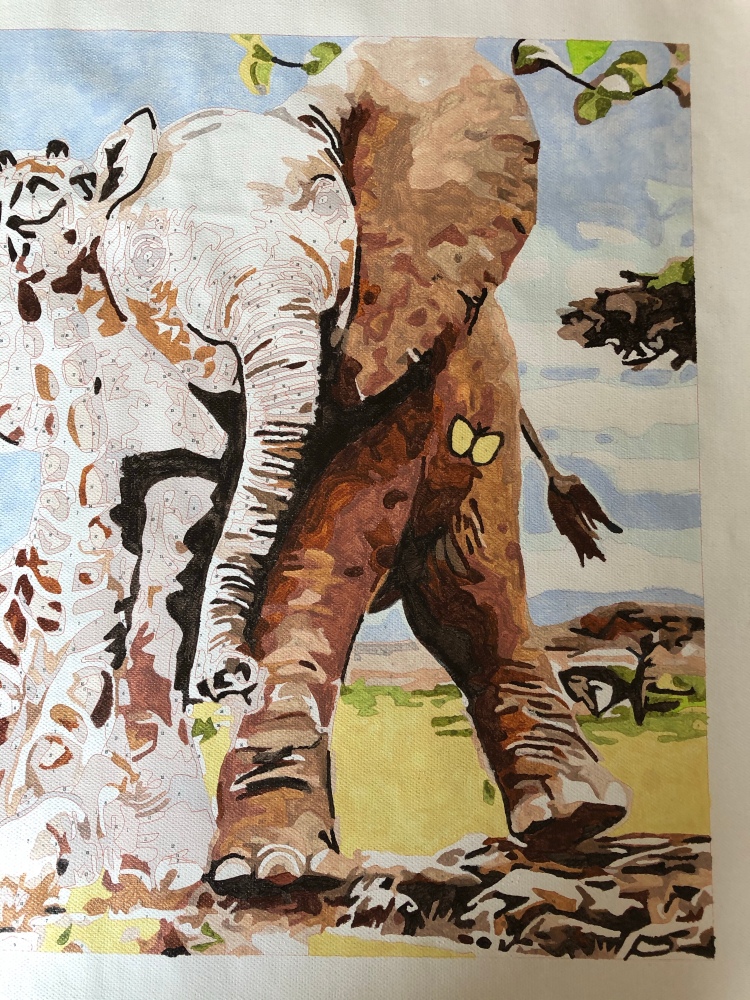 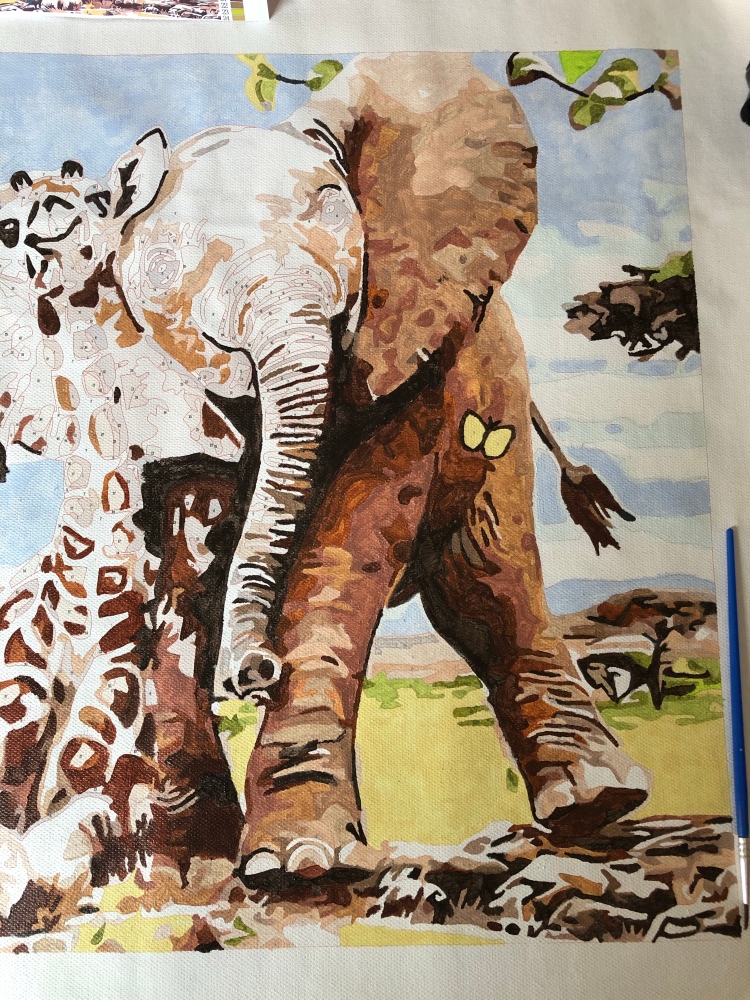 As it really wasn’t very nice weather today, I got on with the painting.