Welcome to charming Honey Brook, Pennsylvania, where bestselling author Ophelia London will bring you on a moving and unforgettable journey through faith, forgiveness, and ultimately love.

Everything changed for Esther Miller with the death of her beloved fiancé, Jacob. Even years later, she still struggles with her faith and purpose in the small, tight-knit Amish village of Honey Brook, especially now that her younger sister is getting married. All she wants is to trust in the Lord to help her find peace…but peace is the last thing she gets when Lucas, Jacob’s wayward older brother, returns to town.

Lucas Brenneman has been harboring a secret for years, the real reason he never returned from Rumspringa and the truth behind his brother Jacob’s death. Honey Brook still calls to him, but he knows his occupation as a physician’s assistant must take precedence. With sweet and beautiful Esther he finds a comfort he’s never known, and he feels like anything is possible…even forgiveness. But she was Jacob’s bride-to-be first. And if she knew the truth, would she ever truly open her heart to him? 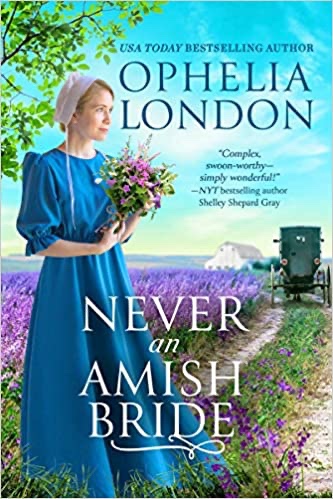 I must admit I don’t usually read books on religion, they either tend to bog the book down on religion, or try and cram their beliefs down your throat!

With this book I didn’t get that, what I got was a lovely story about two people who should have been together from the start, reconnecting and finding one another again.

Esther was two weeks away from being a bride….. That was two years ago, she didn’t  marry the man she was betrothed to, he died. Not being able to move forward, Esther mourns for her dead fiancé, watching her siblings and friends marry. Will she forever remain a single woman?

Lucas left his old life behind him, moved on and became a doctor’s assistant. His love for his brother made him the man he is today, the frustration and anger towards his community and father was put across well. I got the impression he wasn’t happy with his way of life, and when he lost both Esther and his brother, it gave him the strength to go.

When they accidentally meet up, panic and confusion is uppermost in Esther’s mind. What is Lucas doing back here? Why now? Confused Esther goes back home to think about Lucas.

Lucas has always loved Esther, he knows she’s the only woman for him. But getting her to see him proves difficult, and then there is his family and council to face. Does he really want to come back to this place? And will Esther and his family listen and forgive him for turning his back and walking away?

I liked this book. We had Esther and Lucas finding their way back to each other. Misinformation and fear kept these two apart for too long. It was nice that Lucas found his family again, forgiveness on both sides was needed, as was the long talk they had before Lucas came home.

If a slow burn romance is your thing, then this one is for you.

*I am an Amazon affiliate and all the book links are my affiliate links. Using them you receive a discount and I do receive a small commission.