A British Heiress in America by Becky Lower 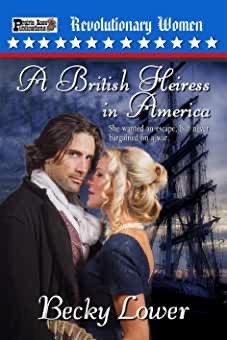 https://amzn.to/3dFhCLz
Description……
Lady Philippa Worthington wants to marry young and sexy.
Her father plans for her to marry stodgy…old…and rich.
What’s a beautiful British heiress to do if she’s going to escape a life of passionless marriage? With her father planning to sell her off to the highest bidder in order to support his own lavish lifestyle, Pippa knows there’s only one thing she can do to save herself.
Lady Philippa dons boys’ clothing and stows away on a London ship destined for the American colonies and a new life. One full of hope, freedom, and the chance to finally live up to her feisty nickname among the rough sailors—‘Pip.’
But instead of finding independence on the high seas, Pippa is plunged deep into the dangerous world of espionage–and the arms of handsome Daniel Simmons, a merchant sailor for the British—who is also an American Revolutionary spy!
Torn between allegiance to her home country and the passion she’s always been searching for, Pippa now faces an unexpected threat—and it may cost Pippa and Daniel the very freedom—and love—they’ve both been searching for.
If they manage to survive the very heart of the beginnings of the Revolutionary War, can the daring spy find love in the arms of A BRITISH HEIRESS IN AMERICA?
My Review…….
A sea captain who may or may not be a spy. A runaway debutant who won’t be auctioned off to the highest bidder.
Not my usual read, but once opened it was a pleasant surprise.
Philippa “pip” Worthington isn’t sure if being a stowaway on a ship bound for America is the best idea she’s ever had, but she’s not going to become some bored London housewife. She longs for love and adventure….
Daniel is the captain of the boat Pip has stowed away on, only he’s unaware that Pip is actually Philippa!!
He’s aware the “boy” is running away from something in London, but that’s not Dan’s issue, but the boy could be useful, if he gets a job in the army, then Daniel could use him as a spy! But he has to be careful, his daughter could become a casualty of war (he’s a widower, his daughter lives with her mothers parents)
I did have to chuckle, Pip is not your usual debutant, she’s quite a character (smoking cheroots and drinking pints of ale!) she is very independent, she’s off for an adventure in America, she’ll marry an officer in the British Army and be happy!
But working as a cabin boy is proving challenging, it doesn’t help that the captain is very easy in the eye, she has to remain in character at all times!
Daniel is a double agent! To the outside world he takes arms to the British army, he also spies for the American government! If he’s caught it could mean death!
It’s a fun read. Well written and very descriptive. Had to laugh when poor Pip was feeling seasick. And when she wished she could have a cheroot!
The banter between Daniel and Pip is lighthearted, Daniel feels he should take the boy under his wing, but with the option of using the boy to his advantage, I found I grew to dislike Daniel!
Chuckling at the inappropriate thoughts the captain has about his cabin boy, he’s off to get laid once he’s back on dry land, but his thoughts keep straying to his “boy”.
And when Daniel discovers his cabin boy is in fact a woman ……
Daniel now changes strategy and decides a debutante would be a better spy! But does he take what Pip is offering?
And Philippa is now facing a dilemma herself, she knows that Daniel runs guns for the British, does she inform the American society she will belong to? Or can she be of some assistance in the fight for their freedom?
🦋
Publication date 20/6/20

*I am an Amazon affiliate and all the book links are my affiliate links. Using them you receive a discount and I do receive a small commission.