Cora has made a mess of everything. When she ran from the tyrant who claimed her like property, she’d hoped to start a new life, not a dragon war. Now, she’s exhausted in both body and spirit. Her grand plan has led to fires, battles and an unbelievably close mate bond with the scariest dragon she’s ever met. She doesn’t want to be sharing thoughts and dreams with Jasper Drake and the demon that lives inside him, but when has the universe ever cared what she wanted?

For months, Jasper’s dragon has teetered on the edge of control as he sought to find and protect his mate. When she moves into the guesthouse of his manor, the fear she feels towards him is an exquisite torture. He’s determined to win her trust, but his dragon is impatient, and her wounds are deep. Sometimes he despairs of ever being the kind of mate she needs—the kind of king his people need.

Jasper is at the end of his rope, his family is dysfunctional, his family owned business was almost ruined, oh and his mate wants to hide from him!!!!

No wonder he drinks and wants to escape….

Cora knows she should be with Jasper, but King’s aren’t good people. She’s hiding from him and her clan, she won’t be a baby machine to produce heirs!! 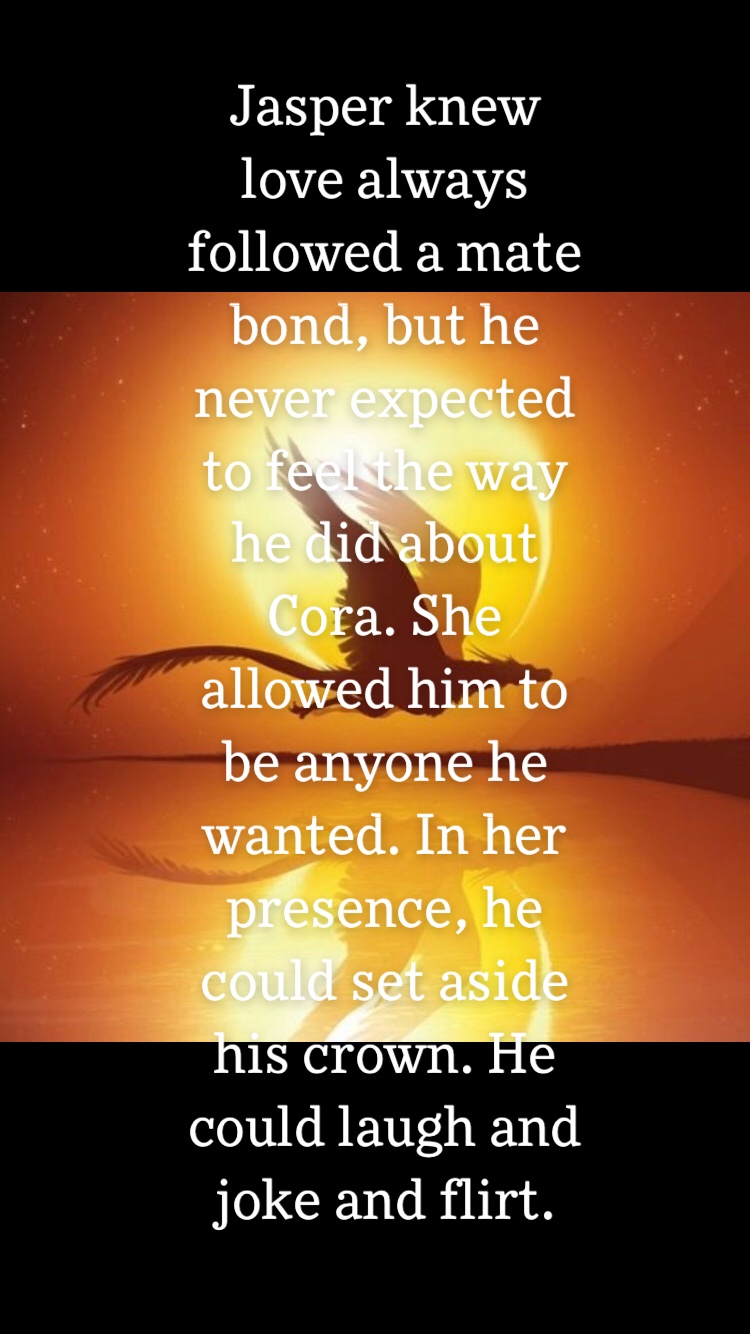 Jasper maybe the King, but he has no idea how to run his court! Thank goodness for his cousin Griffin (although he thinks of his as a brother, after his father took him in)

His dragon is slowly taking over Jasper’s life, the dragon wants to escape Drake Mountain, it’s always circling, it’s always searching from something.

Until it shares the fact his mate is in the forest on his mountain, then Jasper is in sync, he needs his mate to keep his dragon from taking him over completely!

How can jasper convince Cora that they should be together? He can hardly contain his beast, it’s all going to go horribly wrong!!!

Jasper has been in all the previous books, he’s come across as really selfish, putting his cousin Griffin in danger on a daily basis.

But as the books continue you understand why his dragon is wants out.

Cora finally comes to Jasper’s home, but she’s not interested in mating, she just wants to be safe. But is she safe from Jasper? And how about her clan looking for her? Getting to know Jasper is a slow process, he wants her now (well his dragon does) but Cora won’t be rushed. Jasper needs to use all his strength and patience to convince Cora he wants her for her. But Cora is convinced that once Jasper knows her secret, all bets will be off. She won’t live in a cage!!

The rogue dragons that have squatted on Drake territory are causing more trouble in their town, causing mayhem with the King and his knights, and harming the mates is the last straw!!!!

It was nice to see all the previous couples in the series. It was fun watching Cora give Jasper the runaround. Reading how Jasper changed from selfish to King was good. When he realises his town is in danger he has to change his ways.

I liked the series. And I had waited to read Jasper’s story.

Definitely happy to recommend this book and series.