If you love the Wild Wild West, you’ll love this steamy hot historical set in the Montana Territory!

Emma James felt secure in her life. Money, social standing and the protection of her step-brother. Or so she thought. When she discovers his dark secrets, he turns on her and sells her to a western brothel to keep her quiet. There, she’s forced to work or participate in an auction. A virgin auction…and she’s the prize.

One look at Emma James, and Whitmore Kane and Ian Stewart know she would belong to them. Marriage was the only way to truly claim her…so they bid and bid well. As their bride, they return to the Bridgewater Ranch and teach her the ways to please not one husband, but two.

But danger has tracked Ian around the world and threatens their newfound relationship. Together, can they fight the demons of the past while forging a future? 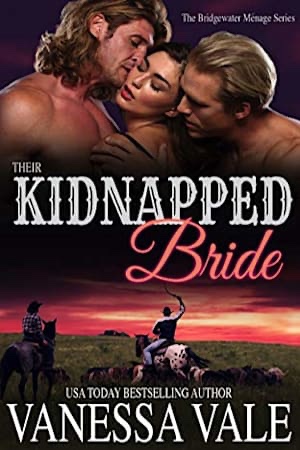 Oh dear!! The backstory had so much potential. A woman being auctioned off as a “virgin bride” and a ménage to boot, a vengeful man coming after one of our heroes, and a sibling who needed to be taught a lesson, who wouldn’t love a story with all that in it?

I know it was only a short story. But with less sex, we could have had a really good story.

Ian and Kane always knew they would share a wife. They’d seen it whilst on their travels in the army, they’ve lived with it on the Ranch they co-own with other soldiers from their platoon. They hadn’t expected to find her at a brothel being auctioned off!!

Emma woke up to hearing her stepbrother selling her to a woman!! And all because she caught her brother copulating with the maid on the kitchen table!! (I mean, at least make it a murder or something a little more than catching your brother at it!!)

If that wasn’t bad enough, the woman owned a brothel!!

Emma could either pay the debt off by becoming a prostitute, or participating in an auction, she would be married off!!

We then spend the rest of the story having sex, sex, oh and more sex!!!