No one is more surprised than Asher, one of the oldest vampires on Earth, that he’s attracted to vamp hunter Jo Radcliffe. She’s smart, a talented slayer, and she’s gorgeous. Something about her pulls at him, like no one ever has before. For a man, whose name strikes fear in everyone—this is something new and intriguing. And quite possibly deadly, if she discovers his secret.

Jo has two things in common with the handsome Asher—they are both slayers and someone is messing with them in a very-much-trying-to-kill-them way. She’s not so happy about joining forces with a dude she doesn’t know. But he’s sexy as hell and really good at his job as one of the Forgotten Brotherhood, whose business it is to execute misbehaving paranormals.

She knows she’s bait in a larger plot to harm Asher and the Brotherhood. And there is nothing he won’t do, no line he won’t cross, to keep her safe—which may be the weakness that destroys them both. 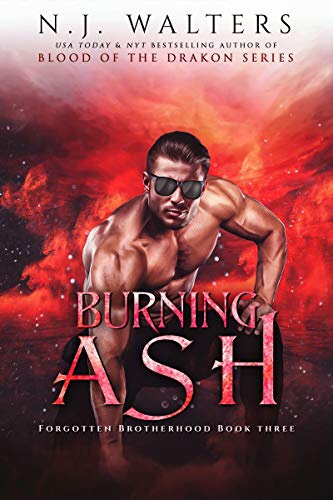 Asher feared no one—man, creature, or god. He’d long passed his normal lifespan. Those he’d loved had been lost to the sands of time. Now the only ones he called friends were the Forgotten Brotherhood.

The Brotherhood had been created by the fallen angel Maccus after the two of them had been hired for the same job.

What could have led to mass bloodshed had instead  spawned the Forgotten.

They were the most dangerous men in existence, loners with loyalty to no one. They had no pack, no coven or  community. Or at least none that would claim them.

They killed only those who deserved to die, paranormal  creatures that murdered without discrimination.

Try to hire one of them to slay someone innocent or who didn’t deserve to die? Well, that never ended well for the one trying to secure the contract.

They mostly kept to themselves, but they all lived by a code.

Kill only those that deserved it and let their gods sort them out.

Kill them before they killed you.

Never, ever betray a fellow assassin.

Simple and easy with little room for discussion. Because once a contract was accepted, it was carried out. There was no other option. In their line of work, there could be no mistakes.

Asher has seen and done many things In his long life.Being brought into this life by a goddess, she set him the task of keeping humans safe.
Maccus and Asher formed the brotherhood, and through the years others members have joined. And as part of the brotherhood, they’ve had to put down some of their friends (that’s why it’s never good to form a close bond) they don’t meet up very often, and it’s usually only to swap information.
Jo is a vampire slayer, after losing her beloved parents to a vicious killer.
She’s good at her job, she trains and doesn’t let anything get in her way.
Asher receives an email that interests him, it warns him of a vampire that’s offering immortality, but in fact is killing his hosts! That’s a big no no, so here he is watching a vampire in Kentucky. But that’s not what got his interest, the fact he couldn’t trace it has him joining in this hunt.
Now usually the brotherhood don’t get involved, the rogue vampires are dealt with by The Vampire Council. The brotherhood’s job is the one no one wants to do.
Asher and Jo first meet whilst dispatching the same vampire.
Both are wary of each other, but Asher guesses who Jo is first, his reveal doesn’t go down well at all with Jo. He’s a Vampire!!! She knows she should take him out, the only good vampire is a dead vampire. But he can walk in the sun, he eats food, all the things vampires don’t usually do!! She needs more information before she acts!
Agreeing to work together until they find out who is sending them the emails.
He could freeze her in place with a mere thought. Make her do anything he desired. But that would make him a monster. The kind he’d dedicated his life to eradicating. “I’ve lived longer than you can imagine. Seen history unfold for thousands and thousands of years. You’ve barely been alive a second in comparison.” Her mouth dropped open, and her heart picked up speed. “Holy shit.” “I could have anything I wanted from you.” Honesty might make her pull away, but better that happen now than after he’d had her. Jo was a human hunter with a limited lifespan, but she made him feel truly alive for the first time  in millennia. He’d lived long enough to understand how  truly precious that was.
And when they find out that vampires are after Jo! And a huge bounty is on her head! Well it’s going to take them working as a team.
Both are attracted to one another, and it’s all ok, until Jo finds out his a vampire. But she can’t help her feelings, but she works alone, it’s for the best, she can’t and won’t get attached.
Asher on the other hand is totally enamoured with Jo, she’s a warrior, a loner like him, but he can’t get her off of his mind. If he’s going to protect her and figure out who is pulling the strings, he’s going to need help.
“Something about you brings out a side of me I buried  long ago.” He’d thought it dead, but some tiny flicker in his  heart still yearned for an intimate connection. And that  scared the crap out of him. “Guess I’m just special.” Her voice was strained but  steady. His head jerked up. Was she joking? She was. The light  in her eyes and the twitching of her lips was a dead giveaway.  The pressure crushing his chest lessened. Could she really  mean it? “You are very special. Truly exceptional.” No  humor on his part.
The story like the first two in the series is full of action and a few twists.
It’s fun reading about a strong female bringing down the male. He’s all strong and posturing…. then BAM!! He’s down for the count and trying to keep his emotions in check.
It’s great that this series have females that are capable of looking after themselves. Only so many books with helpless females I can read!
Maccus plays I think a prominent role, he’s wondering why the brotherhood are being targeted?
Quick recap…. Maccus and Morrigan (Fury Unleashed) were sent to kill each other. That didn’t happen, they worked together to figure out Maccus is a pawn in the fight between heaven and hell! Then Alexei Medvedev and Cassie Dobbs meet, (Arctic Bite) it’s a contract on her life! Again they worked together to find out who was pulling the strings.
So I can see where Maccus is concerned that the brotherhood is being targeted.
Back to the story…..
Asher and Jo now aware of the danger, agree to work together.
In such close proximity sparks are sure to fly. Jo is aware her time with Asher is limited, Asher doesn’t worry, he’s decided to end his life when Jo gets old and dies. Happy with his vow, he intends to spend as much time her as he can. But first their stalker……
So who is behind the scenes pushing Asher and Jo together? For what purpose? Was Maccus correct when he thinks it’s the Brotherhood that’s in danger? Who has that type of power?
You don’t need to have read the first two books in this series. I don’t think you’ll miss anything.
Beautifully written, full of drama and passion. Moments of comedy and sadness. Descriptions that come to life on the page.
It’s a series that’s now on my TBR list.
I’d recommend this book all day long.
🦋