Description…..
Cast out of Heaven and now the king of Hell, Lucifer is a powerful fallen angel warrior with a heart as cold as ice and soul as black as the bottomless pit. For millennia, he has ruled his realm with an iron fist as he plots the demise of his ancient enemies.

When one of those enemies dumps an unconscious mortal female in the courtyard of his fortress and leaves her there, Lucifer finds himself entranced by the beguiling beauty and tempted beyond all reason.

But is the enchanting Nina an innocent pawn in the eternal game or part of a plot against him?

No Cliffhangers. No cheating. Just happily forever afters guaranteed to melt your heart and set it racing!

Discover the passionate, possessive and protective warriors of the Her Angel world from NYT best-selling paranormal romance author Felicity Heaton as they fight to shield the women they fall in love with from a dark world of demons, angels and vampires.

Don’t miss the previous series in this world too! 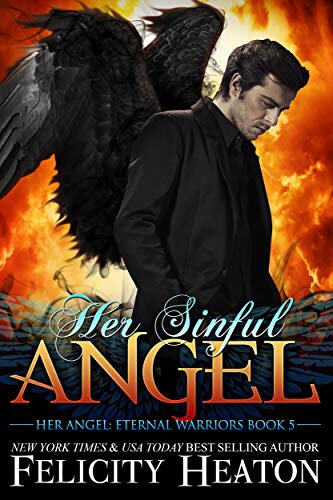 My Review…..
Last book in this series, and it’s a good one.
We all know the story of Lucifer being thrown out of heaven.
We all know that Lucifer is a bad guy through and through, no redeeming features.
And I did wonder why the author would give such a bad guy a happy ending? But maybe she’s going to tease him, then take away his female to punish him?! It’s an idea I totally got on board with, he had a hand in most of these books, his aim was to break free from his prison.
But he knows if he gets out, then it’s game over for the world (and without giving too much away) and that’s something he doesn’t really want to do anymore!
Lucifer is the guy we all love to hate, Prince of darkness, king of the demons, but as we get to know Lucifer a little better, there is more to him than just his handsome face and sinful nature…..
But Lucifer hides a secret, if he escapes then so do the angels that he holds down here. And if they escape. Then it’s definitely the end of the world!! So he’s doing heaven a favour (well that’s the way he looks at it)
Nina is always wary, always hiding. And when she wakes up, her first thought is that her ex has her! But seeing a gorgeous man standing in front of her instead, has her thinking he maybe rescued her?! But she needs to be on her guard, because of this kind man helped her, then she could be endangering him too!
There is the battle between good and evil, right and wrong. And as most of the previous books have stated, it’s not always the good guys that are good. People can redeem themselves.
Living in Hell for a millennia will corrupt anyone, having no light in your life will harden and darken any soul……
Lucifer doesn’t understand his feelings for this female, she has to be a trap. His enemies are always trying to find a way to break him, to anger him to the point of breaking out of this hellish prison. But Lucifer won’t be tricked. And he’s going to find out who this human woman is and why she’s here.
And as Nina and Lucifer become entangled with one another, there is another force waiting to strike him down! Can he rely on others to help him? Or will he be forever alone?!
I have to admit I love these stories, you don’t need to read the previous books, but if you do, then I’d advise to read them in order.
There is a new series being spoken about and I can’t wait to see where we go from here.
Written with enough action and violence to keep me entertained, and plenty of steam and tender moments to make you root for the bad guy😉
Sometimes it’s not black and white, there are many shades in between.
Highly recommended series.
🦋