The Clawed Squad: The Twins (The Bear Shifters of Clawed Ranch Book 3) by Kim Fox 👩🏻‍💻

Layla Winters is out of shape, out of breath, and out of luck. After a series of strange circumstances, she finds herself hanging from Montana’s highest cliff without a hope to survive. That is until two identical twin bear shifters come racing up the mountain to save her.

Slate and Karl Ember are two bear shifter twins looking for a mate. Karl wants to complete the triad which is any twin bear shifter’s destiny but his brother Slate has a problem with sharing, and there’s no way that Slate is going to share a mate. But when the curvy and quick witted, Layla, literally falls into their muscular arms, all bets are off.

Layla is perfect for Slate, but she’s also perfect for his brother, Karl. Can the two brothers learn to share a mate or will they both go down fighting? 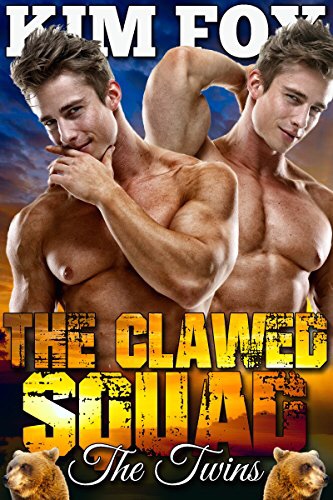 Layla is or was a wedding planner, being dumped by her boyfriend was bad enough, her life was going nowhere and now she’s stuck half way up a mountain! Can her day get any worse?

Slate and Karl are the jokers in the pack. Never taking anything seriously. And always arguing! They agree on nothing except their love of flying.

Being cowboys wasn’t where they saw their lives ending. They thought they’d be in the army forever, but now they are here in the mountains of Montana they couldn’t imagine living anywhere else.

Being the jokers of the crew, Slate and Karl don’t have cowboy jobs, they tried to wriggle out of that one, and so they are suppose to come up with ways to make money for the ranch. Yeah, that’s not going too well…

Meeting Layla wasn’t where they thought they’d find their mate. (On the side of a mountain) In fact Slate is adamant that they won’t be sharing a mate ever. Twin shifters always share mates, no one has ever gone against the triad, but Slate maybe the first bear to ignore fate. And that breaks Karl’s heart, when they were kids they were inseparable, and now all they do is argue. If they don’t share a mate, they will always feel incomplete!

Book 3 in a five book series.

This one sees the twins fighting then falling for the same woman.

Not my favourite book in the series. They were always acting like kids and not grown adults (very off putting) And I don’t really like brothers sharing the same woman, but there is no incest so I could go with it.

There is lots of laughter in this book. And a few tender moments with these clowns and their mate.

I like the fact the previous couples are seen in this series. They all live in the same area so it stands to reason to catch up with them.