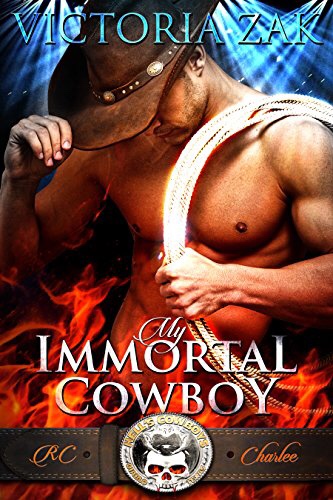 Will you be ready to serve when Hell’s Cowboys come for you?

There’s a new sheriff in town. With his coven torn apart by corruption, vampire Roman McCoy leads a posse deep underground to prepare for the battle of their lives. His newest recruit, cowboy RC Reid dies after a bull ride and awakens to a new world with vampire benefits. He now could be the key to taking down the vampire king of Diablo, Texas. Torn between the fanged advantages of his new life and the memories of his old one, there’s one thing RC can’t leave behind, Charlee.

Charlee Brysen lost everything the day a bull killed the only man she’ll ever love. But that’s not the only thing that vanished, so did her dreams for college. Now she’s about to lose her family ranch and will do anything to save it. Stripping for cash, her life is flipped upside down when RC waltzes into her club and demands a lap dance. Besides being dead, there’s another little problem; he has fangs!

As the King of Diablo tightens his icy grip on the coven, Charlee’s life hangs in the balance. RC must save her, but will their love be stronger than blood?

Russell Cage Reid “RC” is going home soon, with enough money made from bull riding. He’s then going home to his girl, and live the happy ending he always dreamed of for the both of them.

But that wasn’t to be! RC died! His last thoughts were of his Charlee girl and how he never got to go home…..

Charlee is going to lose her home, it’s as simple as that! Caring for her elderly gran has left her with a huge pile of debts! But she’s not one to lie down and give up! She became a stripper, and a damn good one (she doesn’t do private dances or lap dances) but still it’s not enough to keep the wolves from the door! She’s going to lose the farm, her only option is to go see a bank and ask for an extension on her loan……

First book in (hopefully) a new series. Although this book has been out a while, so I’m keeping my fingers crossed that the rest of the cowboys get their stories told.

Dhampire is half human half vampire, and pure vampires will hunt them down and kill them (that’s where RC and the Hell’s Cowboys come in.) They patrol and keep the peace, but they are also targets for those who don’t want Dhampire’s to exists!

Two years serving and RC gets to wear the fancy belt buckle and join this crazy rodeo! At first he’s not going to accept this, he needs to go home and see Charlee, but he has to control his thirst for blood first, and finish his training….. it’s going to be a while before he can see her!!

A great read, and I’m hoping each of the “cowboys” RC rides with gets a story.

Roman is the leader of Hell’s Cowboys, and he’s not someone you mess with (there is also more to Roman than meets the eye!)  Tibbs, Kit, Clay, Selene and Thana are also part of HC, each have a story and a sad past (we get to see glimpses, and it leaves you wanting more)

Mace Wrathmore is a business man, well on the outside, inside he is a shark circling its prey, and at the moment, Charlee is his intended prey!

But what Charlee isn’t aware of, is that Mace is no ordinary business man, oh no, he’s a vampire! Creating a haven for vampires, and using the humans as cattle! Charlee has property that Mace wants, and he’s going to get it, one way it another!!

And when Charlee gets sucked into the world of vampires, will she be able to cope? Will her world change? And can she forgive RC for bringing this hell to her door?

I liked this story, yes it’s the usual bad guy/good guy and let’s fight over the same girl type of book, but it has a different slant on the genre.

My only gripe, why is the woman always having to be bailed out?! Why can’t she have a nice life and still be saved? Why can’t she be the one to save him?!

Other than that, a really enjoyed the book.

Growing up in the sister city to Stirling, Scotland, Scottish flare was abundant throughout Dunedin. From her High School band to the annual Highland Games that took place right across the street from her childhood home, the bagpipes beckoned her toward her calling. It seemed only natural for Victoria Zak to want to write in the Scottish historical romance genre. Add to the fact, she was also a paranormal romance junkie, there was no doubt that her influences would be the driving force behind her stories.

Although, she never sought out a writing career, her desire for the written word grew the more she read. Her love for Scotland, curiosity of history, and passion for romance has inspired her to write her first book, Highland Burn. The Guardians of Scotland series continues this winter with book two, Highland Storm.

Today, Victoria Zak lives in the sunshine state with her husband, two beautiful children, and three furry friends. Living in paradise, being a stay at home, and to be able to share her stories has been a blessing.

Victoria loves to hear from her readers. You can connect with her through FB, Twitter, G+, and her website, http://www.victoriazalromance.com.