Zane (Keepers Of The Lake Book 6) by Emilia Hartley 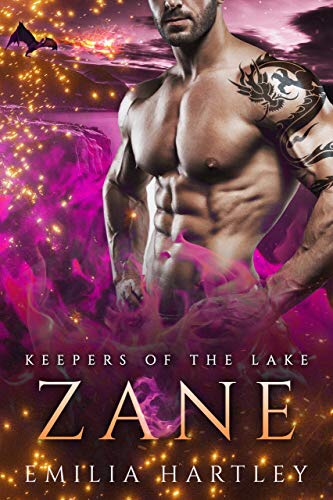 He doesn’t even know her name.

When Zane Thompson emerges from the lake, he can barely walk. He certainly can’t run after his mate. There’s no question about it, though. She’s his fated mate—her screaming at the water’s edge broke the curse that had kept him asleep for years. His nightmares still haunt him in this unfamiliar waking state, though. He fully intends to deal with the authors of his curse. But later. When he sees the blonde, everything else falls away. His nose is full of her scent—gardenias and vodka. That’s his mate.

He needs to find her.

Chelsea Montrose wants to forget her boring classwork, forget her lonely house, forget the scary wave that nearly killed her, and especially forget her cheating ex, but neither her vodka nor her one-night stands help her forget for long. Maybe that’s why she goes out to the lake one last time to scream out her frustration. She’s had way too much to drink this time, though, because she falls into the water, and almost convinces herself that a naked, sexy hunk pulls her back out. N-A-K-E-D. No way is that real. Chelsea hightails it back to her place and throws out her stash.

But the naked guy (now clothed) follows her back to her house, tells her his name and spins her some fantasy about being a dragon shifter she saved from a curse. He seems harmless, and their chemistry is great, so she lets him stay the night, but no way is she getting into anything more than a one-nighter, especially with someone so unstable.

That’s the last thing she needs.

So why does she have to keep convincing herself?

Zane is the final installment of Emilia Hartley’s steamy Keepers of the Lake series. A great story on its own, this book is even better when paired with the others. And, like all Emilia’s books, it has a strong female lead, a hot shifter guy, and a satisfying HEA.

Reading List:
Keepers of the Lake
Book 1 Cole
Book 2 Heath
Book 3 Alec
Book 4 Asher
Book 5 Link
Book 6 Zane
Final book in this series…..
Zane is finally free!! If you’ve read the previous books, you’ll know what I’m talking about. If not, then just a little recap….
Many years ago, Zane and his Clan were taken in by an older self entitled dragon. He thought he could take over the world, Zane, Cole, Heath and Asher tried to stop him with the help of a witch, but Alistair had compromised the witch, and instead of trapping Alistair beneath the lake, poor Zane was put in his place!!
Unbeknown to the rest of his clan they thought they’d vanquished Alistair, and got on with their lives. Leaving Zane alone and trapped beneath the waves of the lake!!
Chelsea was in Asher’s book.
When we first meet her, she comes across as selfish and shallow, all she talked about was landing a rich guy and living the good life.
So when I read she was going to be a mate for the last dragon, I was curious as to how she would change.
Reading her background you get why she is the way she is, and you can’t help but feel sorry for her!
Being freed from the curse, Zane wants revenge on Alistair and his clan mates. He’s now under the impression that they are all working together! So it’s up to him to stop them reeking havoc on the unsuspecting world!
He never thought he’d get a mate. But she’s nothing like he’d imagined!
He knows they are meant to be together, but she keeps running away from him, then he has to rescue her from whatever dangerous position she gets herself into!
The road these two travel is a bumpy one. She doesn’t want love, love doesn’t last. She wants to be happy, and thinks money is the way to go!
Zane has a hard time reconciling the past with the present.
Being trapped under the lake for so long has changed both his personality and his dragon!
I have to admit this is one of my favourite books in the series, it gives us more background to the younger years and Zane’s perspective.
What I didn’t like was the battle, it was a total let down! The battle between good and evil was nothing more than a few words!!
And that brings this good series to a close. You definitely need to read in order.
It had such potential, and it was let down by the ending!!
🦋