Description……
She is running from her past life as London’s most prized mistress.
When beautiful Fancy Booker’s last benefactor leaves her his fortune, she sails for the new country of America.
Giving herself the name Liberty Wexford, she hopes to set a new course for her life—alone.  The last thing she needs is another man in her life. He has no time for a woman, since the Revolutionary War is a jealous mistress. Hawk Gentry has two guiding principles. First, as a Son of Liberty, he must be cautious of others, especially anyone British. Second, as a child, he and his Passamaquoddy Indian mother were left alone while his French father trapped or fought wars. He vows never to do the same to any woman he loves, and the family they may have. Will the war unite or divide them?  When Liberty and Hawk run into each other on the unruly streets of Boston, they begin a tentative friendship. Even though neither wants romance, the sparks fly between them from the moment they meet. As their relationship blossoms, their pasts rise up to haunt them.
Will Liberty and Hawk overcome the obstacles that seem certain to force them apart? With the Revolutionary War beginning, can love hold the hearts of a Hawk and A BRITISH COURTESAN IN AMERICA?
Reading order:
Revolutionary Women:
Book 1 A British Heiress in America
Book 2 A British Courtesan in America 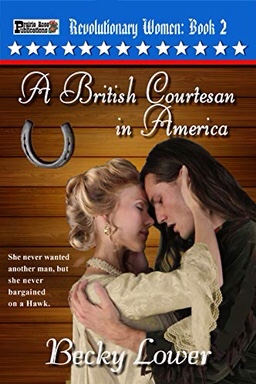 My Review……
Liberty is on her way to America, to start a new life.
But it seems her old life wants to follow her, and on the ship, she makes the acquaintance of a fellow ship mate, but Liberty is not going to settle for a little fun, she wants something permanent.
Hawk is part French, part Passamaquoddy Indian, he’s a blacksmith by day, but I’m his spare time he writes columns for a paper, to rally the American troops, he works hard, he has no time for love…..
Their first encounter is when Liberty loses a shoe abs almost gets run over! Hawk comes to her rescue. There is a spark between them, but Liberty is not going to fall for it, and anyway the gentleman in question wants to return her back to her home as quick as possible!!
It makes a change for a mistress to take a starring role, they usually get delegates to sex scenes or villain status.
But Liberty didn’t start out as a courtesan, se came from a loving family, but as time went on her parents died, and Liberty found herself in a place where her face could make her a fortune.
Eventually the draw between Hawk and Liberty is pulled tight, they begin a friendship, and both Hawk and Liberty realise there’s could be something more, but her past raises its head, and when she tells Hawk about her past, he’s shocked, and tells her he wants nothing to do with her!!
Does Liberty swoon like a maiden with the vapours? No, she picked herself up, renames herself and continues with her life…..
I loved how Liberty reinvents herself, she’s a woman with both a spine and a brain. She’s not afraid of hard work, she gets a few jobs within this book, she’s determined never to be a kept woman again.
It did make me chuckle at the double standards Hawk had, it was ok to visit one of those ladies, but it was another thing to take one as a wife!! It’s not until both his friend and his mother point out that Liberty may not have had a choice in what she did to survive.
And so preparing to eat humble pie, Hawk goes to find her and apologise, but she’s not there! And Hawk has to use his tracking abilities to find his missing love…..
It’s a nice afternoon read.
It touched upon the American/England war.
It gives us a different female character, rather than the timid and virginal female, it’s a strong and resourceful woman.
It’s part of a series, but it stands on its own, no need to read the first one.
🦋