Secret of the Vampire (Deathless Night – Into the Dark Book 2) by L.E. Wilson

He was my deepest revelation and my darkest secret…..

Bad boys were never my thing, unless they existed within the pages of a book.

Until Alex Moss came to my rescue like some sort of avenging angel. He saved my life, which is why I believed him when he told me the threat against my life was back, and only he could protect me. With his dark hair, golden eyes, and broad shoulders, the warlock was hard to resist. Yet even as his kisses made me crave more, there was something about him that frightened me. It wasn’t until I tasted his blood that I knew it wasn’t magic that brought us together, but fate. The warlock is MINE…..

I saved her from a curse, only to get caught in her spell.

Kenya Darce was like no other vampire I’d ever met. Adorable, quirky, and sexy as hell, she turned me on with one look over the top of her black-rimmed glasses.

But ever since the night I exorcised the spell from her body, we’ve had a connection between us. It was completely unexplainable, but it was there.

And now the thing that tried to kill her is back, and I’m the only one with magic dark enough to fight for her.

Forbidden to go near her, I couldn’t stay away. Nothing and no one will keep me away from her.

A Note From The Author
I mentioned this in book 1, but I thought it was worth repeating… If you are new to my books, there are a few things you need to know about this series to avoid any confusion. The “Deathless Night-Into the Dark” series is an extension of the original “Deathless Night” series, picking up the storyline of The Moss Witches that was started in the original series. And, the characters from Deathless Night will be making appearances throughout this series, starting right here in Secret of the Vampire. I’m thrilled to be with these characters again, and I hope you are, too! Happy reading, and I hope you enjoy Alex and Kenya’s story!
Publication date 12/2/2021
Reading Order:
Deathless Night – Into the Dark
Book 1 Night of the Vampire
Book 2 Secret of the Vampire 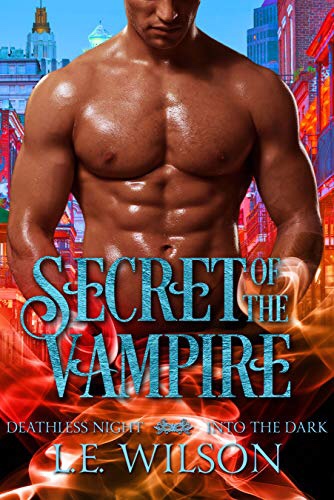 My Review…..
Kenya was cursed in the last book (and without giving too much away) was sort of saved by the Moss Witches Coven (Lizzy from Night of the Vampire book 1 helped her)
She’s back working in the club her “maker” Killian owns (it’s a male strip club) she’s not 100% there, but better than she was.
Someone or something is out there following her…. stalking her…. who? Or what?
Alex is obsessed with the vampire he saved, he doesn’t know why, he only knows there is a deep connection between them. And protecting her is his only concern.
But vampires and witches don’t mix. The pact forbids it (even though his cousin is now mated the the vampire leader!)
You’d probably need to read the first book to get the whole background on Kenya and Alex, there isn’t much, and to be honest most of it is repeated in this book (but you’ll want to read the first book anyway) 😉
Alex has a secret! Does he know? His magic is darker than the rest of the coven. And his pull to the female vampire makes no sense, and then a plot twist comes along and it all a makes sense!!
Spending time with one another shouldn’t happen, but neither can stay away. And when Kenya is targeted, Alex is the one leading the charge, he doesn’t care that both Judy (his coven leader) and Killian (the vampire leader) have told him to leave her alone. He’s going to protect her.
Chemistry is stronger and hotter than the first book (I got the feeling Lizzy was always ready to bolt, and Killian had an entitlement problem) the connection way tighter too.
Lots of action and plenty of spicy moments.
The plot is also more involved (first book needs to set the stage as it were) we get that impending doom feeling.
So now we have the bad guy added into the plot, we have the reason why he’s doing this, and boy is it a good plot. It definitely blends with the first series, and I’m glad I’d read them all (but if you haven’t, then I don’t think you’ll miss too much)
So can Alex and Kenya really be together? How can they get past Judy and Killian? And now this new threat!! It’s going to tear both coven’s apart…..
Oh oh oh ….. and for fans that loved the first series there is a nice surprise waiting for you (I squealed when I read it) 😆
Who’s next? And when can I read it?!
🦋