In the fifty-two domains, there exists two groups of people: The bound and unbound, those without powers and those with them. Only the unbound can hold the highest positions in the government: The Card Holders.

When her domain’s Card Holder dies, seventeen-year-old Neela Blydes is forced to participate in a tournament to find the unbound most worthy of leading the Queen of Hearts Domain.
But the tournament isn’t as glorious as it seems. It herds unique unbound known as Specialists into deadly combat. Winning by default is nonexistent and killing is permitted.
As Neela progresses through the first few rounds, she realizes the tournament is just one of her worries. The burn scar on her left shoulder suddenly flares up at random times, an elite assassin marks her as his next target, and a frightening connection to the murderous rogue organization comes to light.
While trying to deal with all these stresses weighing on her shoulders, one more appears in the form of a white-haired man with crimson eyes.
Dangerously familiar crimson eyes…. 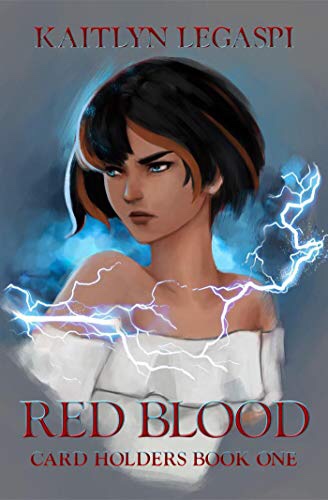 My Review….
A new author for me, and one I’m going to be adding to my reading list.
We start in the past. Men in suits come, and kill her parents and force Neela and her brother to escape with nothing but their lives!
Neela needs to hide who she is, she’s unbound yes, but someone pretty special, and she needs to be careful. Someone wants her dead, Or under their control!!
Unbound? Bound? What or who are they? The Bound are people that can’t use abilities, so Unbound can. They all have different abilities, and most people are scared of them. And as Neela has two powers!! Then she’s doubly dangerous!!
So after their parents were killed, Neela and Jacen (Jacen is her older brother) make their way to a small hospital (Neela was injured in the attack) and that is where they have lived ever since, they’ve become adopted children of the doctor who treated them.
Domain is an area you live in (like a town) and unfortunately she lives in the poorer area, but Neela and Jacen are pretty happy, that is until Neela is told she’s going to have to participate in the tournament.
The tournament felt a little like divergent/hunger games. Staying alive gives you the chance at becoming the next leader in your domain. But everyone knows the tournament is a license to kill the unbound..
There are a few characters introduced early in the book, I have a feeling they are going to be with us for a while…..
Brochan Cordis is Jacen’s boss and is going to train Neela how to participate in the tournament, training is hard and Neela is left wondering how she’s going to survive the training and the tournament! Brochan is also associated with the domain they all live in (does he ulterior motives?)
We meet William Parker (or Will or Parker as he likes to be known) as the pilot that picks Neela and the gang after an incident that nearly sees Neela not entering the contest at all!! He’s going to be a friend an ally.
Lily is Brochan’s sister and Parker’s wife. She works the computers and enters Neela into the tournament, she comes across as a big sister.
Neela is wary of getting too close to people (other than her brother) but these people persevere and slowly gain Neela’s trust.
Amil Galway and Neela meet, and they are not going to be friends. He antagonises her and gives her the nickname “shrimp” and wouldn’t you know it, he’s one of the contestants in the tournament (and a pretty powerful one) and in the Organisation (but they are getting hungry for power and domains) but getting to know him, Neela sees him as a sibling in the shadow of his older and more dangerous brother!!
The tournament is a learning curve for Neela, she thought she was good (and a little cocky) but she was soon brought back down to earth with a bump!!
Each round is surprise, but not as much as the personal attacks on Neela!!!
And who is Redd Ember? Friend or foe? Well after you’ve read this book, your going to know…..
So does Neela become the next Card Holder of the Queen of Hearts?
Cliffhanger? Not really, but it does leave it open for the next book.
Romance? A budding friendship, definitely. Romance? Who knows.
YA? Definitely. The fight scenes are as graphic as an adult might read.
Really well written, and really well thought out. If there is another book, I’m up to read it.
🦋